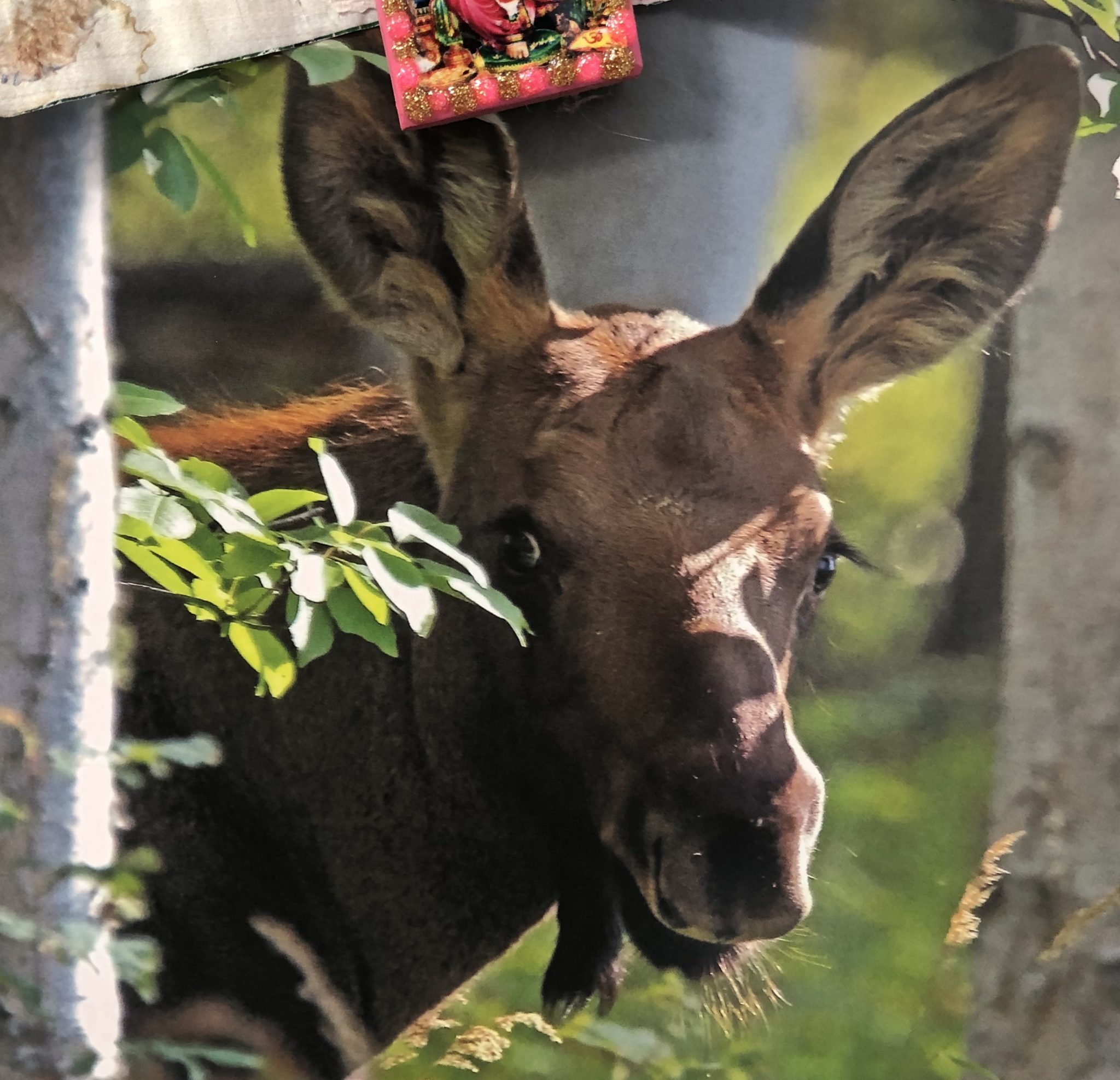 My accountant’s brother, Bud Marschner, lives in Fairbanks, Alaska and every year he makes a calendar of his wildlife photography. Last year I cut out and hung by my kitchen sink a photo of a moose snoozing in a snow bed. This year this photo of a baby moose took my breath right away. Look at the eyelashes on that thing! Nothing captures the essence of Mercury in Pisces than the magical beasts who co-exist on the planet with us. I don’t know if you have ever had the gift of seeing moose but when you do you’ll never forget it. It’s like viewing a creature from another dimension, one that is lovely and majestic beyond what you could imagine. And what I think is so amazing about them is that even though they are way big (I mean WAY BIG) one could be a few feet away from you in the forest nibbling on leaves – they are vegetarians – and you might never fully see it. I have seen a few in my life and each time it feels like an interdimensional siting – exactly what you might expect as Mercury dips into Pisces.

Mercury Retrograde
February 16 – March 9
Mercury entered Pisces February 3
Mercury stations retrograde at 12 degrees 53′ Pisces on February 16
Mercury will move retrograde back to 28 degrees Aquarius
Mercury stations direct at 28 degrees on March 9
Mercury returns to 12 degrees Pisces on March 30
Mercury, the planet of communication and how you process incoming info, transiting through Pisces feels likes how Mercury retrograde feels anyway, except in this retrograde period Mercury is actually transiting Pisces so it’s like a double whammy of Pisces infiltrating the usual circuitry and that can be nothing but crazy-making – if you let it. Mercury in Pisces is going to overlook details like mad so if you need to be serious about matters (sometimes we just do) Mercury in Pisces is going to get a good laugh about that. You know how things look and sound under water? Expect that during this retrograde period. Then you won’t be surprised and you too can have a good laugh at your own expense.
.
So what gets activated when the detail brain goes underwater for a bit? Edges blur, Ideas flow. Divine inspiration is the order of the day and the night. Your dreamworld is speaking to you. You need only listen .How you thought things were, may not be. Checking in with what you thought was real turns out not to be so. You will question reality, which is not a bad thing at all. You will be holding more loving and compassionate thoughts towards yourself and others. You will feel more LOVE towards everyone and everything because Pisces is ONENESS, unity consciousness, call it what you will – the feeling and knowing that we are all in this play together. Mercury in Pisces will take you there. Don’t fight it. You cannot fight the river and you certainly won’t ever win with Mercury in Pisces. Have you ever tried to wrestle a cloud? You see where I’m going with this. Surrender to the delight of not having to think so much! Be with what is and enjoy the ride.
Mercury in Pisces, Mercury retrograde, Mercury retrograde in Pisces, moose, moose calf